Today was a proud day.

My son graduated from high school — my first reason to be proud.

My son met my parents, Miriam (his mother), and his aunt and uncle for lunch.  Not only was he engaged, he was thankful for the generous gifts from my parents.  He spent time and didn’t rush away — another reason to be proud.

Honestly, the events of the day could have gone a different direction.  After all, Nate could have reacted to the separation of his parents, expressed his bitterness.  This was his day, his graduation day, and his parents sat apart from each other.  We got together after the ceremony, planned lunch together.  But Nate showed up, posed for pictures with us, enjoyed himself.  My parents were pleasantly surprised, even impressed, as was I. 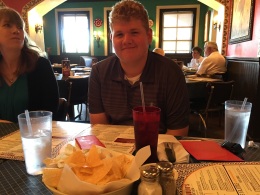 I’ll take it.  These days I don’t get to see him often.  There is a high possibility that is why he showed up, sat and talked with me, seemed to enjoy the time together.  And, after all, it was his day.

Yesterday, I finished the majority of the painting in my condominium.  There is a little work left, but the majority is done.  May 6th, when the condo became my own, there was a lot of work to do, mainly due to the chain smoking habits of the person that I bought the condo from.  My dad came up to help me move in at the end of March, commented on the smoke stench then.  It’s gone, but it took a lot of work to make that happen.  On top of that, this place looks real nice and my parents were impressed.  The colors that I chose are subtle and warm, and once I moved my bed into the master bedroom, it was real obvious that the colors were the right choice.  Yes, I am proud.

I will take days like today.  Proud is good!

Apparently, my only toilet option after 10 PM from now on will be to pee off of my balcony.  Either that or pee/poo in a bucket.  Dishes in the sink?  Save them for the morning.  Out of clean underwear?  Commando if I don’t remember to stick them in the clothes washer before 9.  While you’re at it, Stevie, make sure the water softener isn’t set to cycle in the middle of the night.

Thanks to a downstairs neighbor intent on complaining about each and every noise or crime that goes on above her head, I have been sufficiently welcomed to my new neighborhood.  23 years of living in a house, situated in a very laid back neighborhood with neighbors who could care less about what I did, had me used to the benefits of living with some space in between.  I forget what it’s like to live in very close proximity to other people, how some people who live in apartments or condominiums itch to exercise their right to gripe.  It took my downstairs neighbor less than a week to report me to the homeowner’s association.

Pray tell, Steve, what horrific acts are you guilty of committing?  My first paragraph alludes to most of her whining — I wash dishes and clothes after 8, sometimes 9 o’clock at night.  Essentially, she doesn’t like the sound of running water.  While she was at it, she threw in a jab at my grill dripping grease on her patio (an impossibility, by the way).

Wait, the grill grease complaint was made during her SECOND attempt to incriminate me via the homeowner’s association.  The first complaints about the water use were made within the first few days after I moved in.

I earned a little bit of the second complaint, by the way, not because I was dripping grease but because I got tired of the woman yelling every night (no exaggeration necessary) from her patio every night, usually around 9 PM or so, usually directed at my temporary roomie (gone now), mostly unintelligible since the rant was screamed in a very thick Polish accent —

I knew about the first complaints after speaking with the property manager shortly after closing on my condo, who I called to find out how to pay association dues.  Pam, the manager, informed me that my adorable neighbor had already complained twice about me.  She also told me not to worry — my cranky cohabitant has complained about every occupant of my condo.  Pam apologized, laughed a little about it with me, said welcome to condo life (heh heh heh heh).

With that in mind, on a Thursday night, after listening to my neighbor moan every night that week, I decided it was time for it to stop.  It was 8:30 PM, I washed a few dishes, and she began her nightly rant.  Instead of merely listening to her until she lost breath and stopped, this time I stepped out on the deck to ask her to stop.

Not the best thing to do, although one would think that the best resolution would be to talk about it, hash things out and reach a compromise.

She spit words that sounded like ‘fix’, ‘police’, and I think maybe ‘pierogi’ was thrown in there.  There was no negotiation.  I couldn’t get a word in edgewise.  Finely, I yelled back at her, told her that she has no gripe when she is complaining about normal life activity.  If she wanted to complain more, then she should keep complaining to the homeowner’s association and not to me, since I knew she had already complained.  She stomped back under the deck to her patio.

I received a call from Pam the next day.

I gave her the quick story.  There was a sigh on the other end of the conversation.  Another apology.  I told her that from now on I would not engage the tenacious tenant, would simply ignore her.

Where are you from?  I love your voice.  Central Illinois?  I have heard that twang before.

Uh oh.  Pam is a divorcee.  The conversation attempted to get much friendlier.  Attempted, I must emphasize.

Condo life is still not bad, even with an overly sensitive whiner underfoot.  It is just going to take some adjustment, including my learning how to be kind and try to watch when I use water at night, etc….

Had I not talked to Pam yesterday, kindness would be more on my mind.  I had to call Pam because I still have not received the payment book or instructions on how to pay my monthly assessment.  In the course of the conversation, Pam leaked that my favorite friendly neighbor had attended the homeowner’s association meeting last Wednesday night, complained that my water softener was cycling in the middle of the night.

Ummm.. that’s what it’s supposed to do.  And it’s been doing that since it’s installation in 2009, I reckon.  Pam agreed.  But she also said that the homeowner’s association board has instructed me to not use the water in my unit after 10 PM.

I know they can’t do that.  Pam, the association rules don’t specify a time.  Legally, they can’t.  I had already used to trusty internet to confirm that information.  There is a lot out there about this blog’s topic.  She agreed.  Just be careful, she advised.

Then she asked me what my neighbor was installing under my deck.  An ILLEGAL awning, perhaps?  I would neither confirm or deny.

Until Mister Furley appears at my front door….