It’s been a while since I have been here, not by choice, but simply because I had one of those nasty respiratory infections that went to my eyes.  The infection turned to pink eye and I felt like I was running on depleted cheap batteries for about two weeks.  That kind of sucks, but it also forced me to slow down and learn to become one with my couch again, something that I haven’t done for a while.  Since it’s summer, I don’t like to skimp on my riding.

Of course, the respiratory infection started to kick in right before I left for a planned mountain bike vacation to Duluth.  Woe is me, I guess.  My first planned ride-cation was foiled by one of the wettest weeks of the summer in the Midwest.  This one was screwed up by being sick.  The infection came on strong the day before I was supposed to leave for Duluth, my destination, but I went any way.  This was my time to ride on endless new trails for four days.

Duluth is touted as a cool place to ride, an IMBA gold destination.  The day I arrived, a Thursday, was rainy.  Drat.  Instead of staying off of the trails, I decided to ride in the rain, on one of the easy trail systems in the area.  It was fun, even with the rain, and I was treated to a spectacular view of Lake Superior from the top of one of the trails.  It was cold and I knew that I likely was not helping the respiratory infection, but it felt wonderful.  The woods were beautiful and it was a unique place to ride, with lots of built in obstacles and smooth rock, something I don’t get a lot of in Chicagoland.

I chose to camp on this trip, mainly because I had limited funds (divorce ain’t cheap).  A friend and one of the salesman that I work with lives in Duluth, recommended the camp sites at the Nordic ski club that he belongs to.  It was cheap.  Mosquito infested, but the pests were manageable with repellent.  I chose a site close to the lodge, mainly because I didn’t want to tote my stuff back to the camp site that I had reserved (the camping was walk in).  There was another camp site in close proximity, with a tent already set up.  I was going to have a neighbor.

The nights were freaking cold.  And I didn’t have a sleeping bag since my ex has all of the family bags in her storage unit.  I spent all the evenings I was there wrapped in several blankets, trying to keep warm.  It probably didn’t help me resist that infection.

The camp site next to me was occupied by Carl, a guy who had recently become homeless.  He was a nice guy and we became friends, spent a lot of time together around the camp fire.  I got to find out if I have the capacity to have a positive influence on someone any more.  As he told a friend before I left, I had more of an impact on him than I could possibly imagine.  We shared a lot, I witnessed him lure two women to his tent via a dating website (scary, if you think about it at all — these women came to him and in the dark).  My last night there, I bought T-bone steaks and cooked them for Carl and I over the fire.

My second day in Duluth, I felt nasty.  Riding in the rain the day before, with a respiratory infection, then sleeping in the cold, probably didn’t help.  I got a bagel and coffee, then headed for what looked like the best trail system in the Duluth area — Piedmont.

I wasn’t disappointed.  The infection made me sweat like a pig, but I enjoyed every inch of the trails there.  There was something for everyone, with double black diamond loops over some of the nastiest rock gardens that I have every seen.  One trail loop, Admiral Rockbar, was so treacherous that I walked the majority of the trail, but I loved it.  At one point, I descended a downhill trail with high berm switchbacks, something new for me.  It was awesome, indescribably awesome. 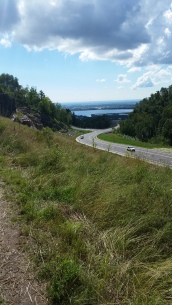 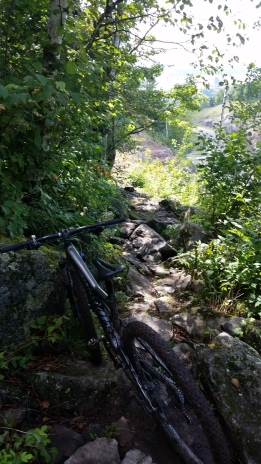 That afternoon, I met my friend who lives in the Duluth area.  He took me to Spirit Mountain, a downhill ski area where you can pay for a lift ticket that takes you to the top with your bike.  There were four downhill trails.  I have never ridden true downhill, except for the trail at Piedmont that I rode the day before.

When I get the chance, I am riding downhill again.. and again.. and again.  I have never had so much fun.  I was tired, but I didn’t care.  I just kept riding.  My friend took me out to eat and for beer at a local Duluth craft brewery.  Things couldn’t get any better.

That night, I had the chills.  I woke up the next morning with a throbbing headache and zero energy.  Instead of riding again (it was Saturday) with my friend, I slept all morning and into the afternoon.  I was sick.

Then my friend, Sandy, an old blogging friend who has become a dear friend over the years, came to visit me.  She lives an hour or two south of Duluth.  We spent the evening around the fire, along with my camp neighbor Carl.  I won’t say much, but it was great to see Sandy again.  She has had a rough go the last year or two, but when I saw her it was obvious that she is doing quite well, has come out of the funk she was in.

I left Sunday afternoon, drove 11 hours to Chicagoland.  Got out of my car and couldn’t stand up straight.  Yep.  I was sick and my back was spasming!  The next morning I woke up to swelled eyes and pink eye.

But it was good.  I rode, not as much as what I would have liked, but I rode.