My feeble mind goes back a few years to a day when perhaps my life was spared.  I still remember the acrid scent of burning flesh and ozone, the horrified look on my son’s face after he had witnessed his father being thrown across the room by forces unbeknownst to him.  I was attempting my first minor project that involved house current, too cheap or too poor to hire someone to do the job who actually knew what they were doing.  We, meaning my former wife and I, had redone our son’s room to a sports theme, with walls painted to resemble grass, a border of various and assorted balls, shelfs lined with his collection of trophies, a sports themed switch plate.  The final touch was to add a soccer ball light fixture to the ceiling fan.

I was up to the task, a little research on how to retrofit a ceiling fan done on the internet.  Armed with YouTube handyman courage, I climbed the short metal extension ladder in the middle of the bedroom, screwdriver in hand, prepared for what I thought was the most simple task to add to my arsenal of household accomplishments.  The breaker to the bedroom was shut off, the master wall switch in the off position.  I should have been safe.

Do I even need to say how wrong I was?

The cover plate on the ceiling fan was removed easily, the wires disconnected.  I put the retrofit fixture for the light in place, attached the wires to the terminal connections then gingerly put my screwdriver on the terminals to tighten them down.

I had touched the metal of the screwdriver against the ceiling fan housing, only to discover that I should have shut off the mains at the breaker box.  Horrified, my son watched as I was launched off the ladder and across the room.  He bolted (a ironic term) out of the room to retrieve his mother, sure that his father was singing with the angels.  I came to as the scent of my own burning flesh mixed with the smell of fresh ozone.  I looked at my hand, still tingling from the trauma created by the introduction of house electricity, intrigued by the slightly smoking black spot in the side of my knuckle.  The current had entered there.  Further inspection revealed where the jolt of electricity had exited at my elbow.

I wondered if I had super powers as a result.  They have yet to emerge.

Recently, the recessed light in my shower stall ceased to work.  I knew failure was coming, since it often shut off a minute or two into a shower as the fixture overheated.  It was only a matter of time before the light quit working.  After it failed, I investigated the cause.  It wasn’t the breaker, which sometimes had to be reset after the light shut off.  It wasn’t the switch.  Replacement bulbs didn’t solve the problem.  It was obvious that either the light socket or the heat sensor on the fixture had burned out.

Crap.  I am still too cheap to pay someone to fix it.  That meant I had to risk my life again to fix it on my own. 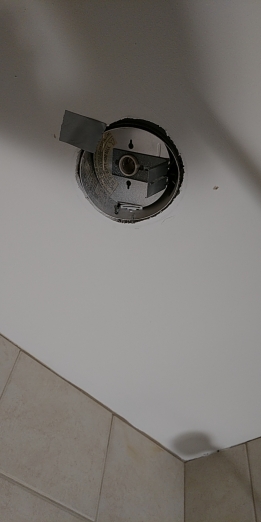 This time experience was on my side, as well as a whole lot better breaker box.  Now I live in a condo, with the main power on a different floor and away from my condo unit.  Shutting off the main power was as simple to going to the condo building utility room and shutting off the main to my unit.  I connected an extension cord and utility light to a hallway outlet so that I would have light in my bathroom while performing the task of replacing the light socket.  I had decided to retrofit a LED light kit, which meant I had to cut the wires, remove the existing socket and bracket, and strip the wires to wire the new light fixture in.  I performed the task as I stood in the tub, half expecting to meet Jesus as I cut the wires.  Half surprised at the lack of response as I cut the wires, then stripped the insulation back and connected the wires with nuts, a relieved SHenry completed the task.  I inserted the next fixture into the recessed can in the shower stall ceiling, cleaned up, turned on the main power, flipped the switch.

VOILA!  Success.  Glorious success.  The new LED fixture worked without flaw and looks even better than the original incandescent light.

A friend heard of my success (bragging is never a good idea) and now wants me to replace her failed closet light.  She had better make it worth it….