Redbird was once my best friend, greeting me each day at my dismal work cubicle, a beacon of happiness as he chirped loudly around the office each morning after a St. Louis Cardinals win.  Cub fans despised my red friend in the same way that I adored him, anonymous death threats scribbled in angry letters on my notepad, even murder attempts.  More than once I rescued a barely breathing Redbird as he hung over my desk, a noose tight around his throat.

Then one sorrowful day almost two years ago, Redbird disappeared, kidnapped by desperate Cubs fans at the beginning of October.  I shuffled numbly around the office that day, unsure of how to find my tortured friend, waiting for a ransom note from his captors.  I only had one hint of what had happened to him, a savage scrawl in red across my desk top —

“You will never ever see your loud friend again!”

A week later, pictures of Redbird on a trolley car in San Francisco were sent to me, then at the Oakland A’s stadium.  Another week passed and Redbird was on a float in a parade in Minnesota, then with beauty queens at a county beauty pageant.  Toronto.  Mardi Gras in New Orleans.  Brazil.  His captors had brainwashed his bird brain.  Redbird looked deliriously happy.

A year ago I lost my job.  I thought I would never hear from Redbird again.  But today, I saw pictures of Redbird on Facebook, frolicking with bikini clad babes, flirting with pretty tour guides, drinking, gambling.  Redbird is living the life I never had. 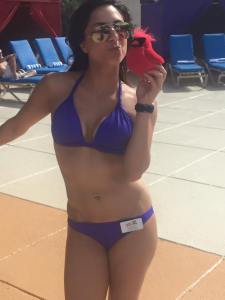 He’s a winner.  A product of a baseball culture that produces the best of the best.  Redbird knows how to celebrate, a veteran of many October celebrations.  I know now that he simply is a bird that has flown the nest, happy to have known me, the luckiest bird in the world.  I am happy for him.

I may never see him again.  And if I see him throwing confetti at Wrigley field this October…. I will kill him.