Four day weekends are the absotutely fer sure best.  Any weekend that promises the opportunity to ride four times is a four day weekend, no matter whether it starts at 4:30 PM on Friday or not.  Mine did.

Mine started Friday evening with a fast fly around the single track dirt trails at my favorite place in the world — Saw Wee Kee park.  One of the perks of riding there on a Friday evening is that most of the regulars ride, then hang out in the parking lot for an impromptu party.  I have joined the ranks of the regulars now, with a bit of respect garnered from being one of the older guys who can hold his own.  One rider, Ernesto, makes sure he has a cold Not Your Father’s Root Beer ready for me, the cap off and handed to me as I roll off the trail, the only price being that he gets to tell the story of the night I brought one shoe with my road cleat on it.

This morning was one of the better rides I have had at Saw Wee Kee.  My routine is to ride a loop to the back of the park to warm up, return to the parking lot to catch my breath and head back in.  When I rolled off the trail this morning, I met a father with his 12 year old son who were at Saw Wee Kee for the first time.  He wanted to know what trails were the best in the park.  I volunteered to lead them rather than try to tell them where to go, an offer they gladly accepted.  Our ride turned into a bit of a training ride, my limited knowledge surprisingly more than what I thought, and I had a lot of fun watching both father and son improve as we rode.  Ray, who turned out to be just a few years younger than me, worked hard but crashed several times.  He earned quite a bit of respect from Chris, his 12 year old son, something I was thrilled to see.  Frankly, I was a bit jealous!

The best part of my morning came at the end of the ride.  Several times along the trail we saw a young couple, the mother with a two year old boy in a sling on her back, a little blonde haired girl chugging enthusiastically on her tiny bicycle between them.  They weren’t riding the technical trails, just the transition double track, but it still was not totally simple riding.  Every time I saw them, it put a smile on my face.

The mom was putting her little boy in the back of her car as I finished my ride.  She told me that her daughter wanted to ride a little more with her husband.  I had to let her know how impressed I was, especially after she told me that they had braved some of the twisty and difficult trails, even though they had to walk at points.  While we talked, her little girl pedaled up to us with her father, a broad smile on her face.  She was proud to tell me how much she liked to ride.  I asked her how old she was.

Patrick, her father, told me his daughter had been riding her little bike without training wheels since she was two years old.  TWO!  He was justifiably proud of his little girl, beaming as I expressed my appreciation for the ride his little girl had just done.  It was impressive.  We talked a little by my car, Patrick asking about the bike rack that I use.

Katherine announced to me without any hint of bashful — the girl talked to me like she knew me forever — that she is four years old.  I loved the way she told me her name, her chest puffed a little as she answered my question. 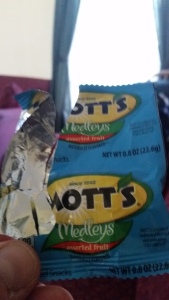 What really made my day was when Katherine approached me, then handed me a package of fruit treats.

“These are for you, Steve.”

“Yes.  Please take them.  We have lots and I bet you need energy.”

“Thank you.  This is the nicest thing to happen to me today.”  And she smiled the cutest little smile for me. I made sure I ate one as she watched.

“See?  I bet you have more energy now.”  Katherine took my hand to lead me back to their car, where her mother had a nice picnic lunch ready for her family.  I shared some time with them, found out where they live and a little about their lives.

3 thoughts on “The Magic of Fruit Treats”